The Forgotten End of Autism


I spent last night in my room in peace. I went to bed around 11, watching a TV show and enjoying the silence of my house. My brother wasn't home for the first time in a while, and we were able to relax for a few hours. The night before, I went to bed at 11, frustrated as I'd just had an argument with my mum. We were both exhausted as, for the fifth time that day, we'd dealt with my 17-year-old brother having a meltdown over - I kid you not - the Teletubbies.

There is no physical way to explain to someone who hasn't experienced autism what the emotional labour is like on a family. It challenges one beyond what they think they can cope with, because it forces us to take a look at life's fundamental question: what is the point?

The issue I broach is one that is rarely expressed in mainstream media and politics - that autism is not and never has been one uniform block of distinction. The actuality is this: autistic people are no more alike than neurotypical people; the condition is an intricate web of varying aptitudes, inabilities and struggles. There will never be an 'accurate' depiction of autism because it is not possible to instill the qualities of every autistic person into a single caricature, and that is widely acknowledged across the autism community.

Even so, there is a 'general' notion of an individual with autism. Lacking social skills, including eye contact and perception of emotion and tone. Sensory overload, instances of stimming. Whether we mean to or not, when we hear the word 'autism', we construct an image of what we assume the person mentioned will be like. We do not think of the ignored edge of the autistic spectrum.

The forgotten side of the spectrum falls to the "low-functioning" children; the ones who cannot feed themselves without making a mess, or perhaps not at all. The incontinent teenagers, the barely verbal adults. Those whose 'mental age' is much less than their physical. People like my brother, Stephen, who seem to exist only in their immediate family circle.

For us, it is simple yet heartbreaking. Stephen will never be able to live independently. He requires constant supervision, can't talk beyond basic requests, can't use the toilet or dress himself; he can't so much as cross the road by himself. He doesn't grasp the notions of money and spending, or even of life in general. His autism is so severe that his world revolves around a rigorous routine of school and home. He thinks in numbers and colours and children's TV shows. In brutal honesty, I don't believe he knows what day it is. 'Mainstream' is a word that hasn't left our lips in years.

First of all, nobody truly recognises how tough it is merely to care for someone who needs assistance with everything. Stephen is 6 ft. 2 and has to be bathed, washed and nappies changed. Physically, and mentally, it is downright exhausting. His sleep schedule is non-existent and his meltdowns are unpredictable. His self-harming happens unexpectedly and can last for indeterminate amounts of time. These are the children you don't see in autism awareness adverts; headbutting walls, smacking their heads, nipping and biting and scratching. It is the most draining thing to devote hours upon hours simply trying to prevent someone from hitting themselves, and a task that seems so stupid and meaningless in nature when you know that, come a few hours’ time, it will simply happen again.

Secondly, there is no general understanding of severe autism sought. I mean, who can I tell? Family rarely if ever come to visit him, be it for reasons of ignorance or genuine lack of awareness. There is only so much empathy my employers can show me when they have never met him. I worry that friends won't comprehend, or that they won't want to know him. I positively panic that potential boyfriends will be put off by him, or reject the idea that he has to come first in my life. The media show nobody like him; journalists don't bother to highlight our situation. Politicians have never asked what we might need. We are completely and utterly alone at our side of the spectrum, in the dark and in the cold.

I am 19; I should spend my days fretting about having enough money to go out at the weekend and passing exams to get my degree. My biggest fear about the future should be whether I'm going to achieve my dream job,
what countries I will travel to. Instead, I worry about what will become of my brother. He understands nothing of pain and manipulation and danger. My brother is so
bearing on the spectrum that he needs round the clock care, and when I am the only one left to do that, how will I cope?
And you know what? I love him so much. I love him more than anything in this world, because if anything he is pure. He doesn't know anything of sickness and pain; he has no awareness of hatred. All he knows is his little bubble of love and care that we provide for him, and in some ways I envy him. He makes me laugh with his wittiness and smarts, and he has kept me going through some rough times. He is a positive influence on my life, and I am not taking away from what he is or has done for me.

But the reality is this: we are tired, and we are alone. Families on the severe end of the spectrum feel they cannot write into support groups, because often their experiences feel too extreme. It is impossible to ever establish a sense of normality, or to lull ourselves into the illusion that things will get better. Our children and family members are not just struggling socially, but struggling merely to exist, to function. With no consciousness among the general public of how hard it truly is, there is no relief from this feeling. We simply have to get on with it. We must continue to take care and love a person who will never comprehend what we have done for him, how much we have sacrificed for him, and will never thank us for it.
Understand this also: if you are part of a neurotypical family, you take much for granted that we will never experience. Family dinners out don't exist. Holidays could never happen. Stephen will never attend a school disco, bring friends over for dinner, or bring home a partner. I will never get to ask him, "do you want kids?" There will be no wedding for me to attend. Never will he have the satisfaction of a job, a home, a sense of fulfilment in this world.

This is what makes my heart ache the most: my brother simply doesn't understand his own existence.

This is why, when asked the loaded and complicated question of, "would you take away Stephen's autism if you could?", my answer is yes. He doesn't understand his actions, or the consequences of them - the hurt and exhaustion, but also the happiness and love, that he brings on our family. He makes no decisions about himself or his future, and has no comprehension of any normal, everyday concepts that we grasp so simply. We all want the best for our children; all Stephen wants is a box of Teletubbies and a can of Diet Coke.

We don’t have the luxury of forgetting about it. You probably don’t see these children often – families find it hard to take them out in public, as it is much too stressful and we are judged immensely. These children don’t attend your children’s schools; they simply pass you in traffic on a bus, so you don’t have to experience their presence. You have the luxury of avoiding "low-functioning" children altogether.  In a 24 hour, 7-week job, we do not.

The reality is that it cannot be taken away. Whatever becomes of us, we will continue caring for Stephen far into the future. All that I ask for in this time is awareness of the hardships autistic families go through in the meagre task of existing, of living at home. As invisible as we may be in everyday life, we are here, sacrificing normality in the name of love. Don’t forget about us.
Katrina xo 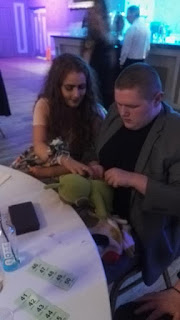 Stephen and I with his beloved Teletubbies. lol

*The first somewhat mainstream representation of the broader spectrum of autism that I have ever come across is Louis Theroux's Extreme Love: Autism, which shows children attempting to navigate
their way through a mainstream school, verbal children on the cusp of being integrated into "normal" life, all the way to children who are barely or non-verbal and have serious self-harm issues. For those willing to delve into the world of autism, it's a good start. It is available to stream on Netflix.

EDIT: Wow! The response to this article has been truly, truly phenomenal. I've had a good few people try and contact me, so you can on the following:
Google Account: kahhtreenahh@gmail.com
E-mail: katrinamcd@outlook.com
Twitter:

Part of my struggle is consistent financial issues, as I try to navigate a degree, two jobs and my life. If you could support me by shouting me a coffee that would be great!
http://ko-fi.com/kahtreenah

Popular posts from this blog

December 17, 2017
After doing a reading of a set of poems I'd written first as a journal entry and then decided I wanted to share, I received a lot of interest in this particular poem. A few people have asked if they could read it independently of myself. I'm just going to leave it here for anyone that wishes to read it; I assure you it's much better read aloud.

i’m falling in love with my therapist (hard)
My mind is my home, he says. If I could control it, I’d have black marble countertops And an island in the kitchen. I’d wrap fairy lights gently around the white bannisters And hang pictures on every wall The windows would be open in any weather. I’d scrub it clean at least once a week I’d pay the rent on time and give the landlord Christmas gifts.
You can’t control everything, he says, Which explains why I blame myself when something goes wrong. I apologise profusely when others damage my home. “They’ve made you that way,” and he notes the way I …
Read more

In Government without a Government | Are we really going to ignore the elephant in the room?